When it was founded in 2000, Aqua Sparkletts by Carlyn Nicole (ASCN) started its operation as “Spring of Youth” in Angeles City, but after two (2) years of operation, changed its name to ASCN and was placed under new management. It aimed not only to address the basic developmental gap on access to clean and safe water, but took its response one level higher. It partnered with Pure Water of Korea, which introduced ASCN to the alkaline ionized water treatment technology. 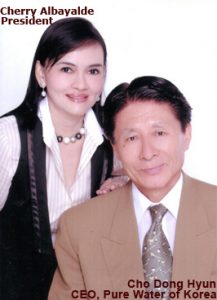 As a provider of alkaline ionized water in the province of Pampanga, ASCN aims to: (1) promote good health and proper hydration among Kapampangans/fellow Cabalen, (2) deliver the highest quality of safe drinking water for its clients, (3) generate employment in the water refilling station industry, and (4) provide livelihood opportunities through its Buying Station Program.

From its humble beginnings in Angeles City, ASCN branched out into more water stations in San Fernando City, Apalit, and Mabalacat, and established its plant office in Bacolor.

Aqua Sparkletts by Carlyn Nicole aims to grow and sustain its leadership in alkaline ionized water distribution in the Province of Pampanga.

Aqua Sparkletts will provide good quality of alkaline ionized Water. We use the latest nano-technology to convert the hydrogen ion into a healthy beneficial drinking water. We provide employment for individuals who share the same passion to succeed, and the opportunity to gain financial independence through our innovative programs. We provide the best customer service experience to all our clients by delivering beneficial products that exceed their expectations while ensuring a balanced and caring culture for our customers in Pampanga.

We provide the best customer service experience to all our clients by delivering beneficial products that exceed their expectations while ensuring a balanced and caring culture for our customers in Pampanga.

Aqua Sparkletts Alkaline Healthy Drinking Water is ideal for drinking, cooking, sports and even for children.